Like our work? Arrange a meeting with us at our office, We'll be happy to work with you!

We are always looking for new talents and we were expecting you. Time to apply, buddy!

When you start a new project, you always try to make it as accurate as possible in the place and time. To do this, we usually do extensive research, we necessarily leave for a place and spend there a few days, «breathing» with local air.

In the case of the VIP hall of the new Rostov airport, we stopped on the theme of the nature of the south of Russia, namely the beauty of the spring steppe, full of amazing flowers and herbs.

Designing space and creating an image, we decided that it would be great if we change the scale and, as it were, sink to the surface of the earth and look at the sky from under the flowers. Either the flowers became big or we are small. Proceeding from this scale, a visual row was born with stems of columns and a ribbon of flowers — petals on the ceiling.

For a long time, I took the search for the material of a meandering ribbon, conceived as the only color accent of the entire interior. It had to be a very high-quality, «precious» detail in the space of the hall. Having tried variants with glass painting and even non-combustible paper, we remembered that the metal has properties to oxidize under the influence of temperature, leaving a beautiful trace of tarnishing on the surface!

Further research led us to titanium, this expensive metal is the brightest of all the colors that appear after processing.

As a result, an article appeared consisting of titanium plates specially oxidized according to the color scheme.

In addition to ribbon and stalk-columns, the project has many verticals that support the graphics and transparency of the image, these are the «legs» of bars and information bars and small black coffee tables and wide chairs on the podium made up of reeds.

In the covering of the floor, we applied concrete terrazzo slabs, with inclusions of colored stones, scattered on the ground.

When developing the planning solution, we managed to split the hall into several functional areas, where visitors can either solitude looking in the window or sit in the company.

In the project, in addition to interiors, we invented a navigation system, in part in the form of traditional pictograms, and partly in the form of floor lines milled in concrete. 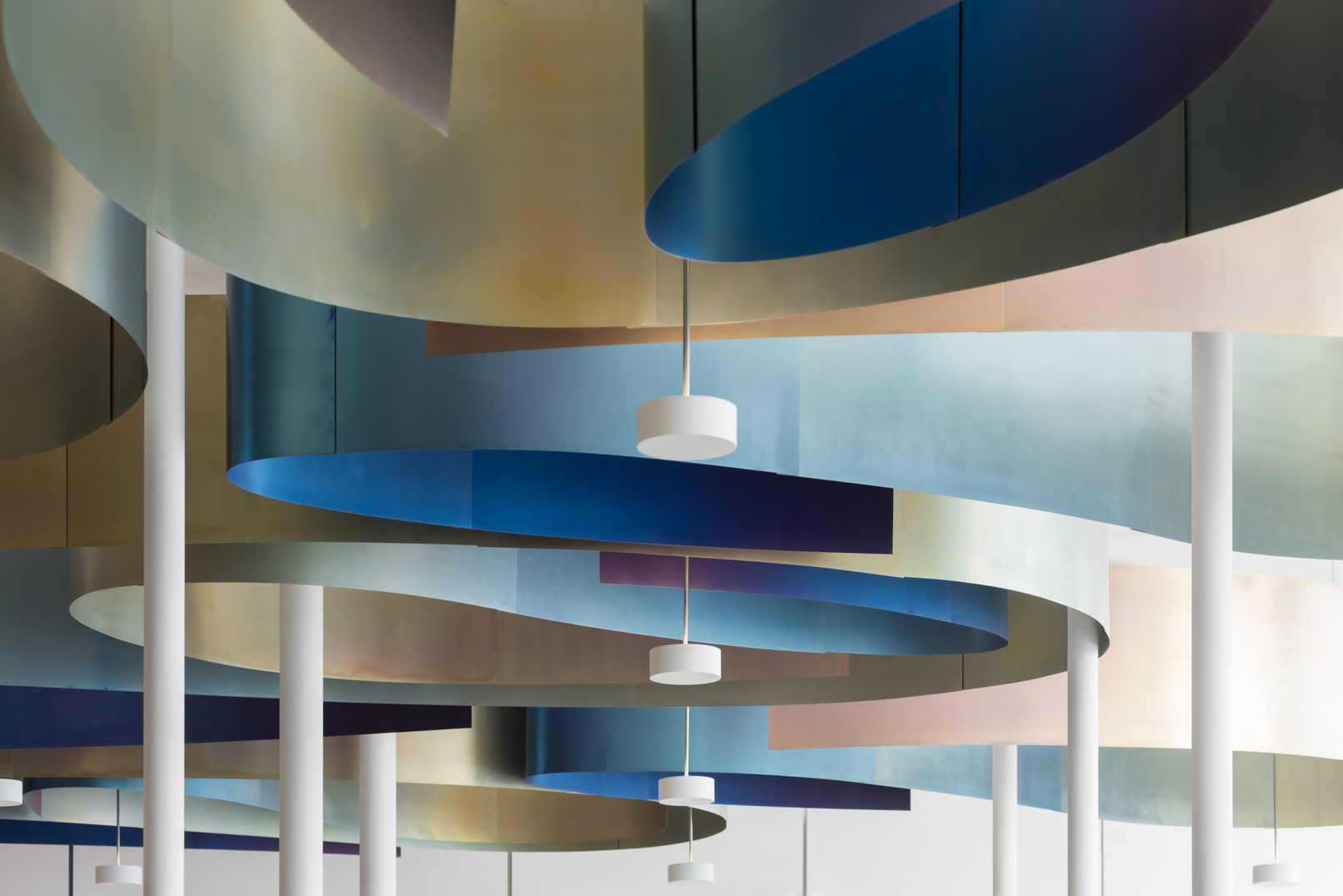 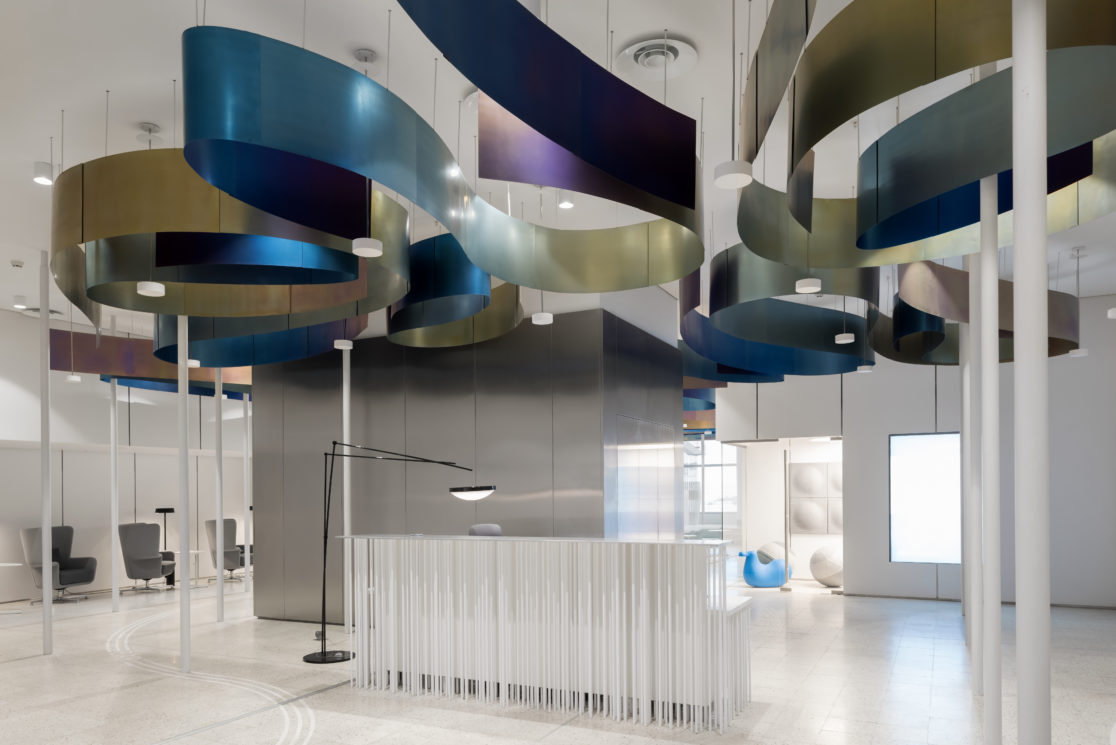 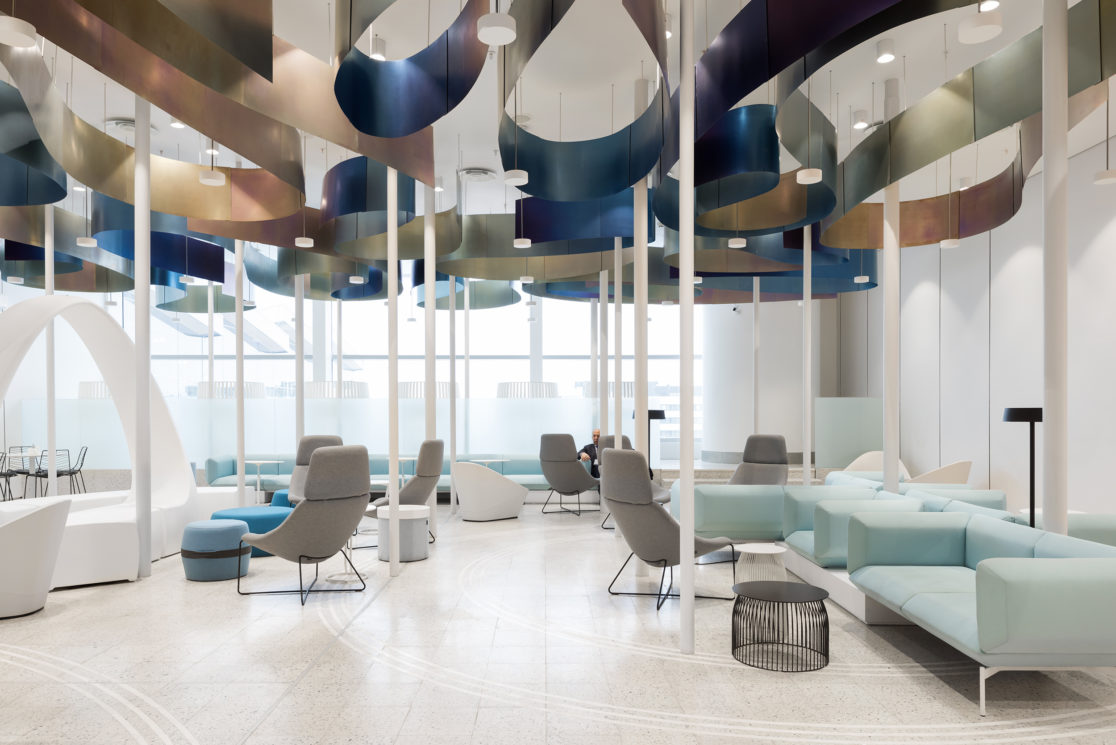 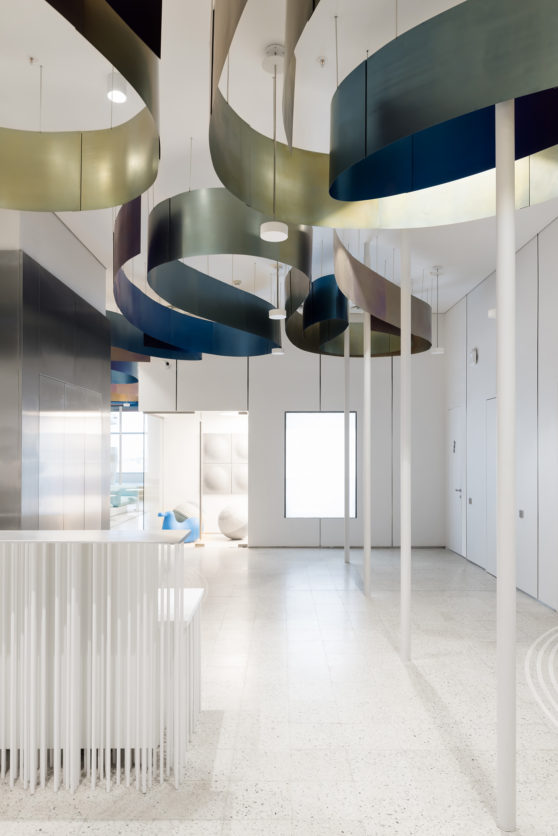 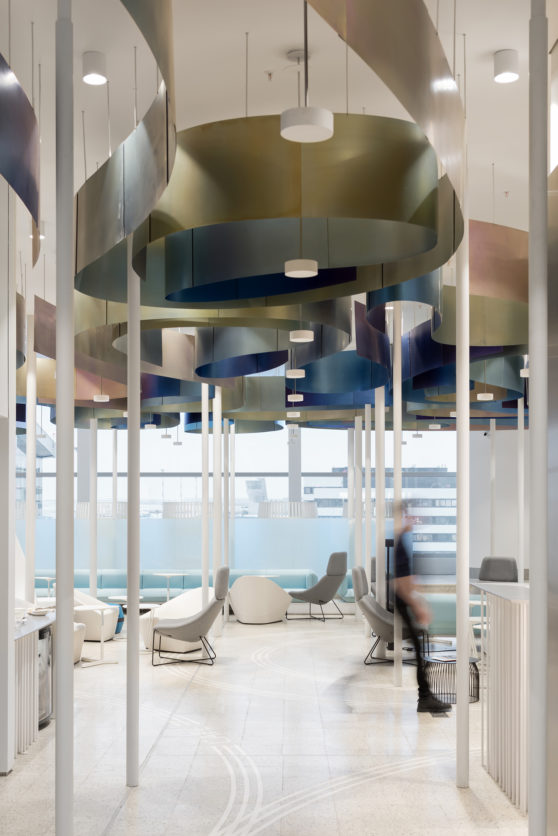 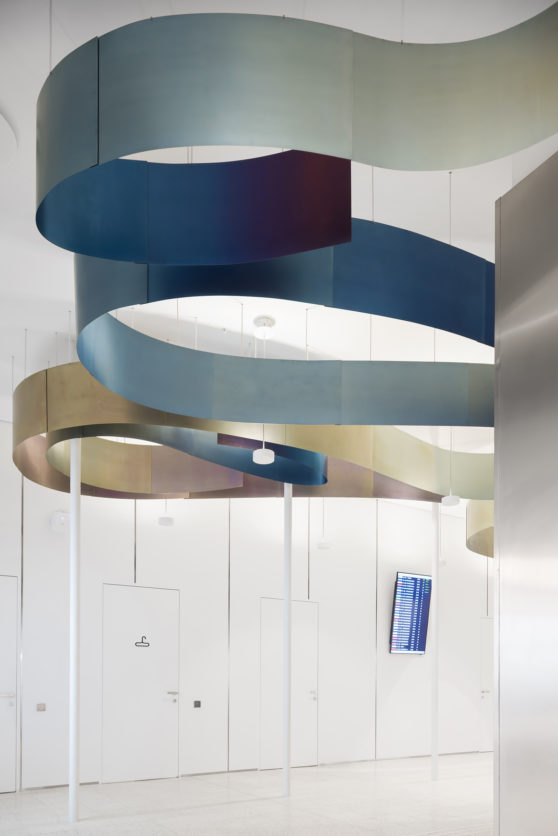 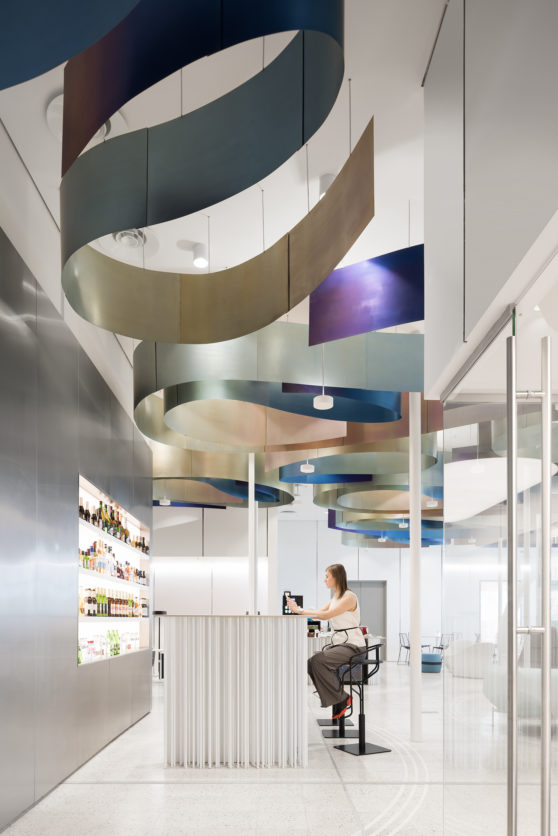 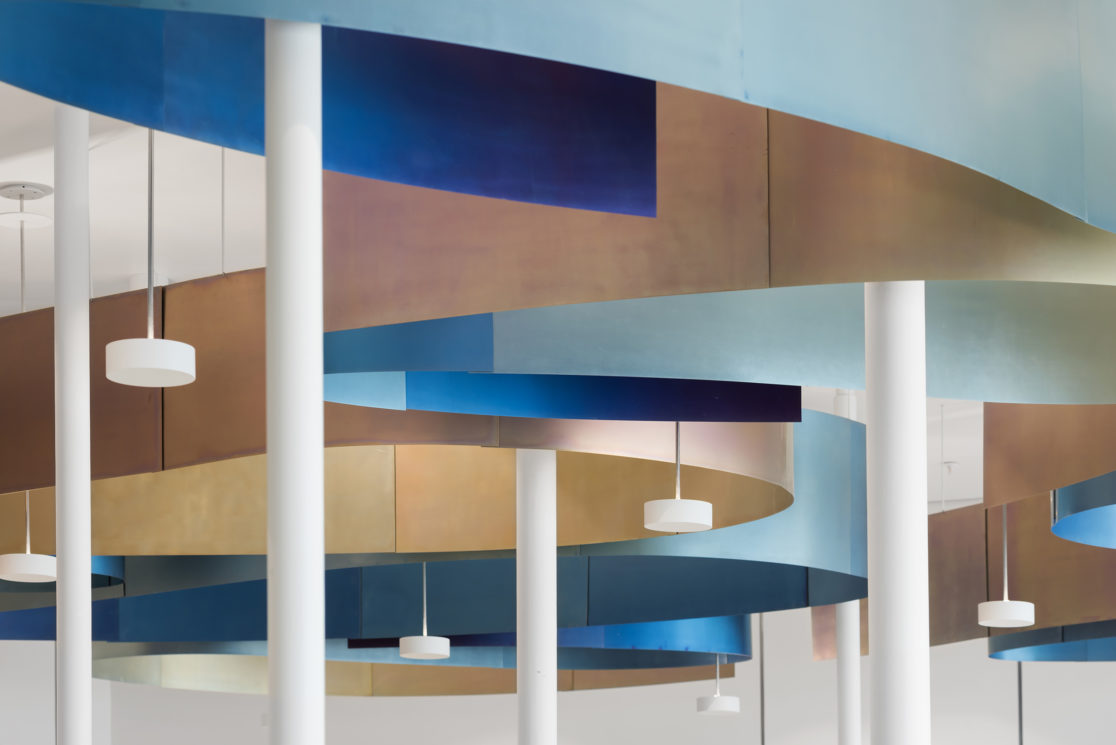 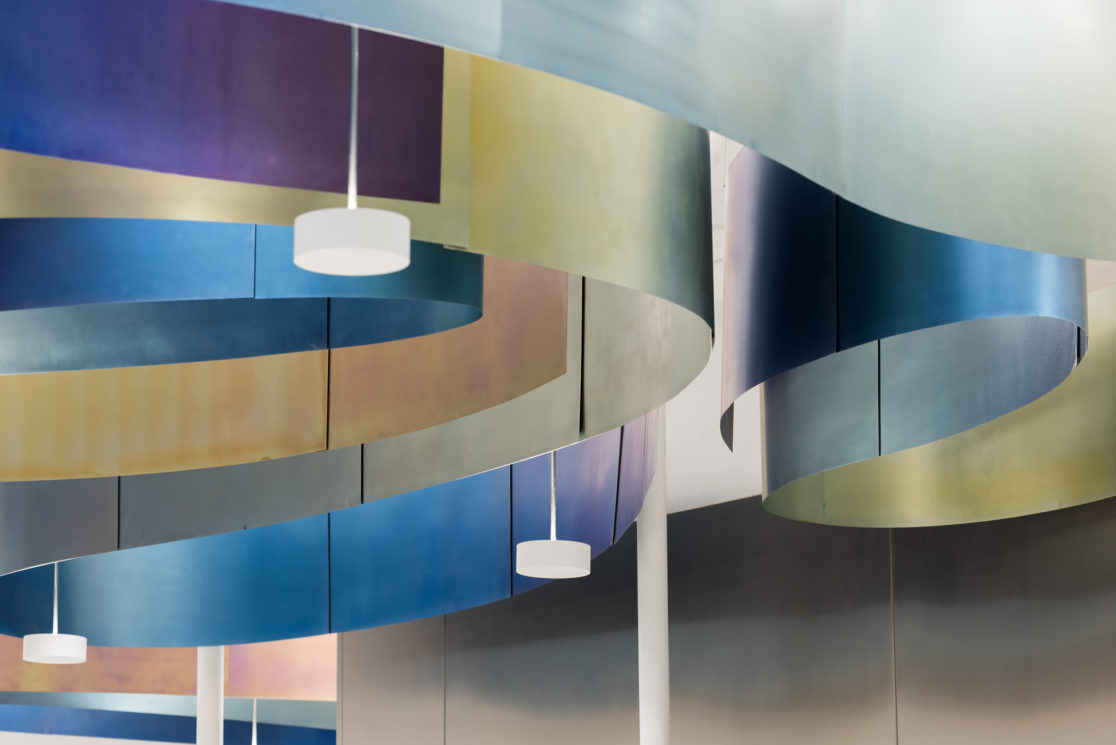 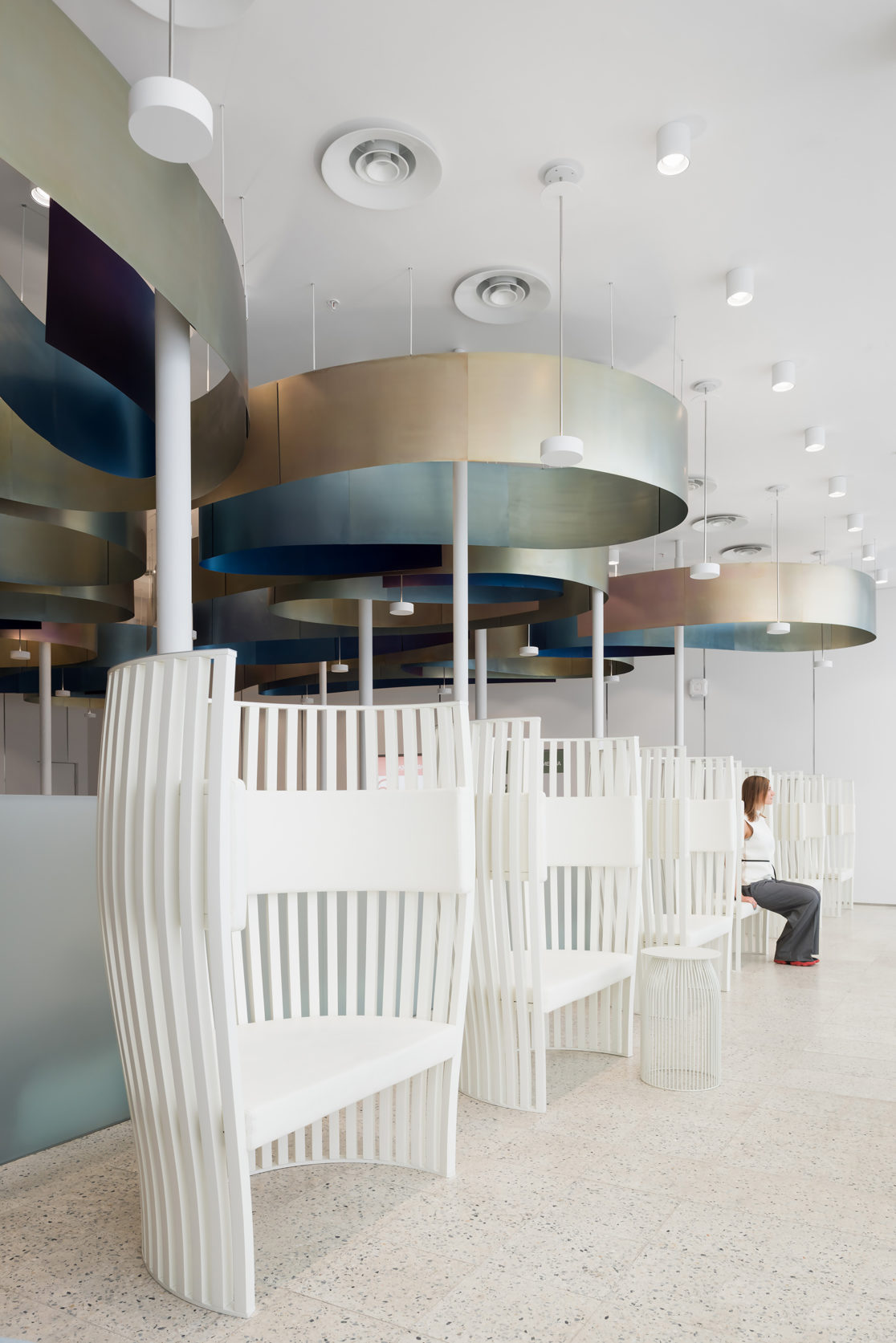 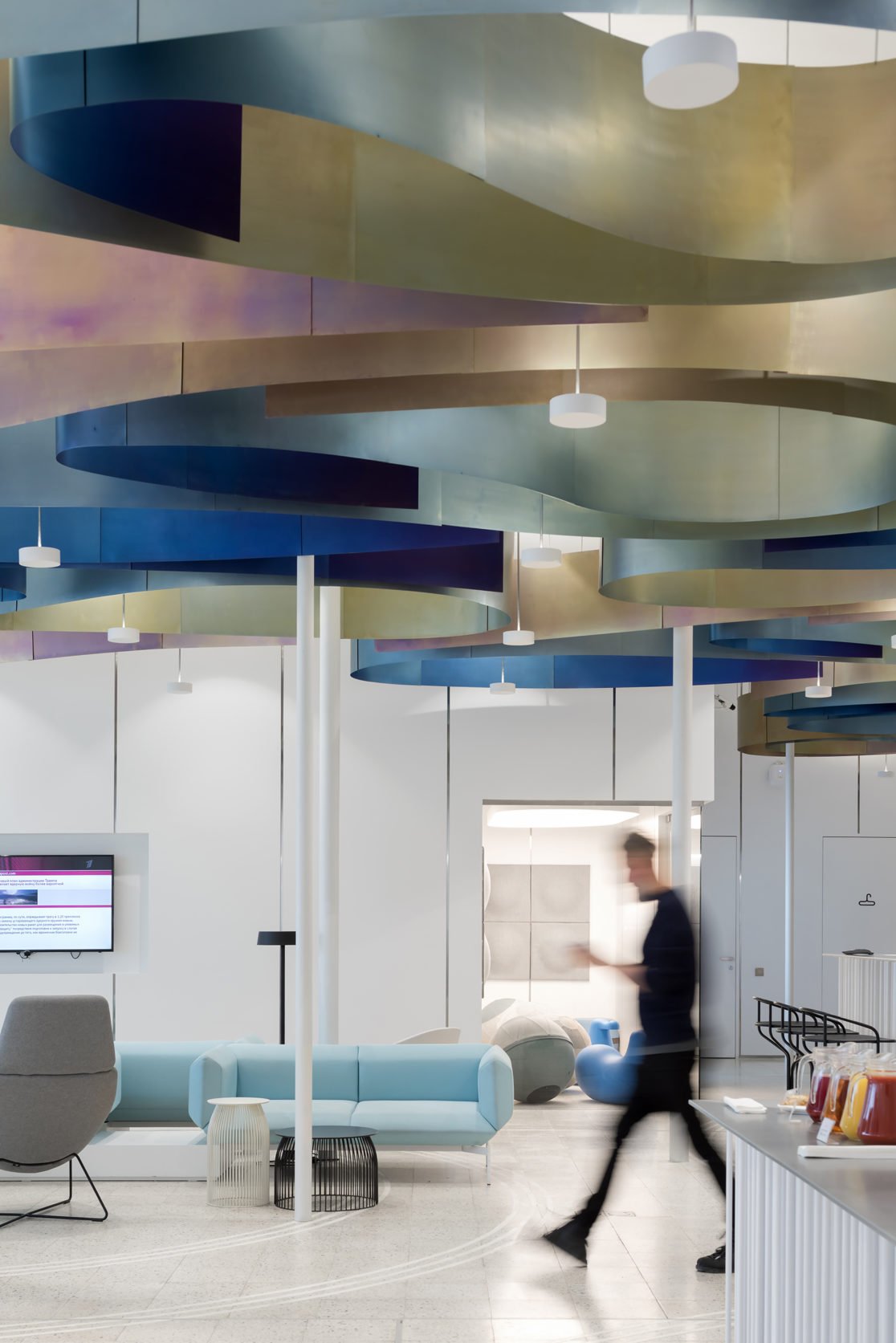 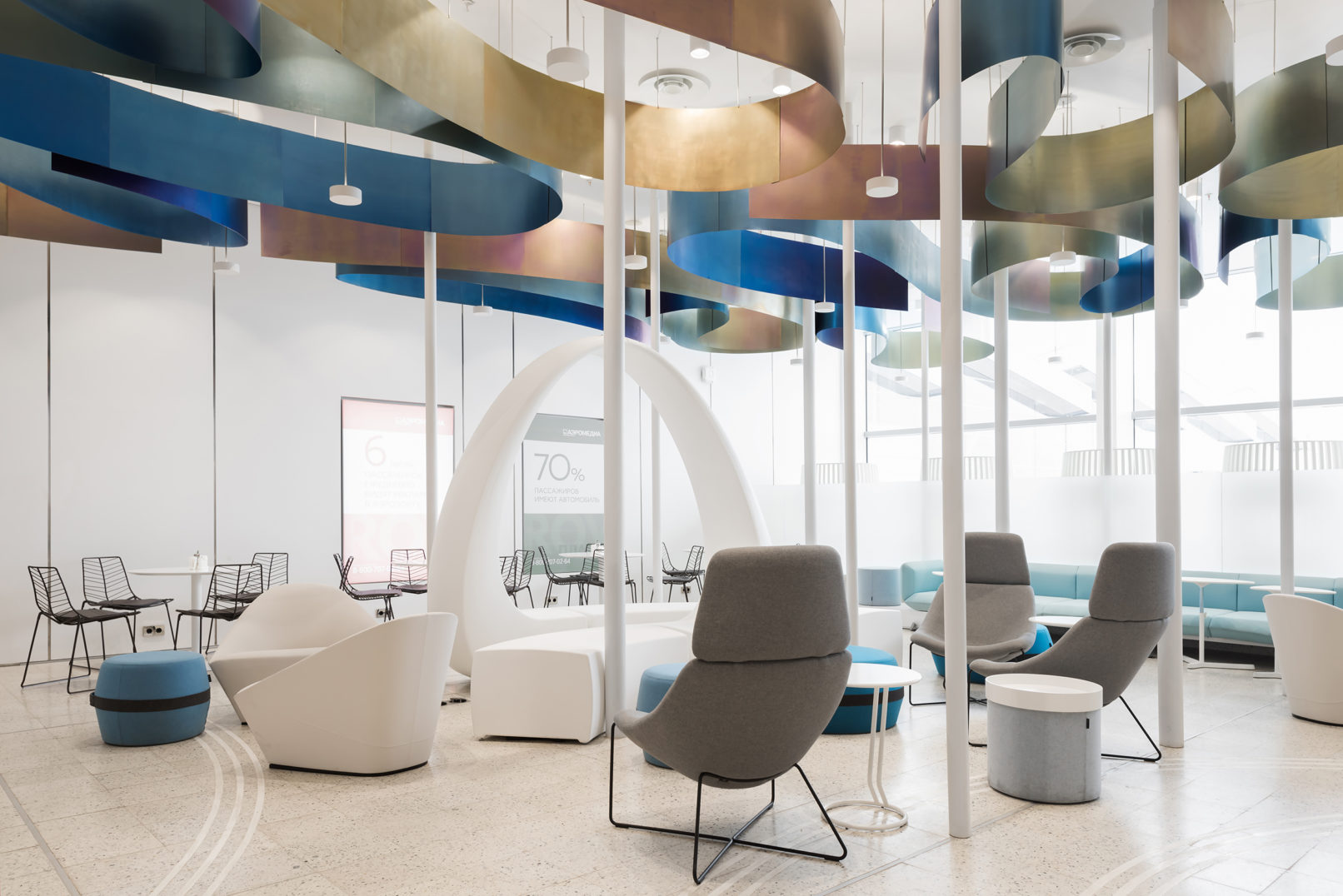 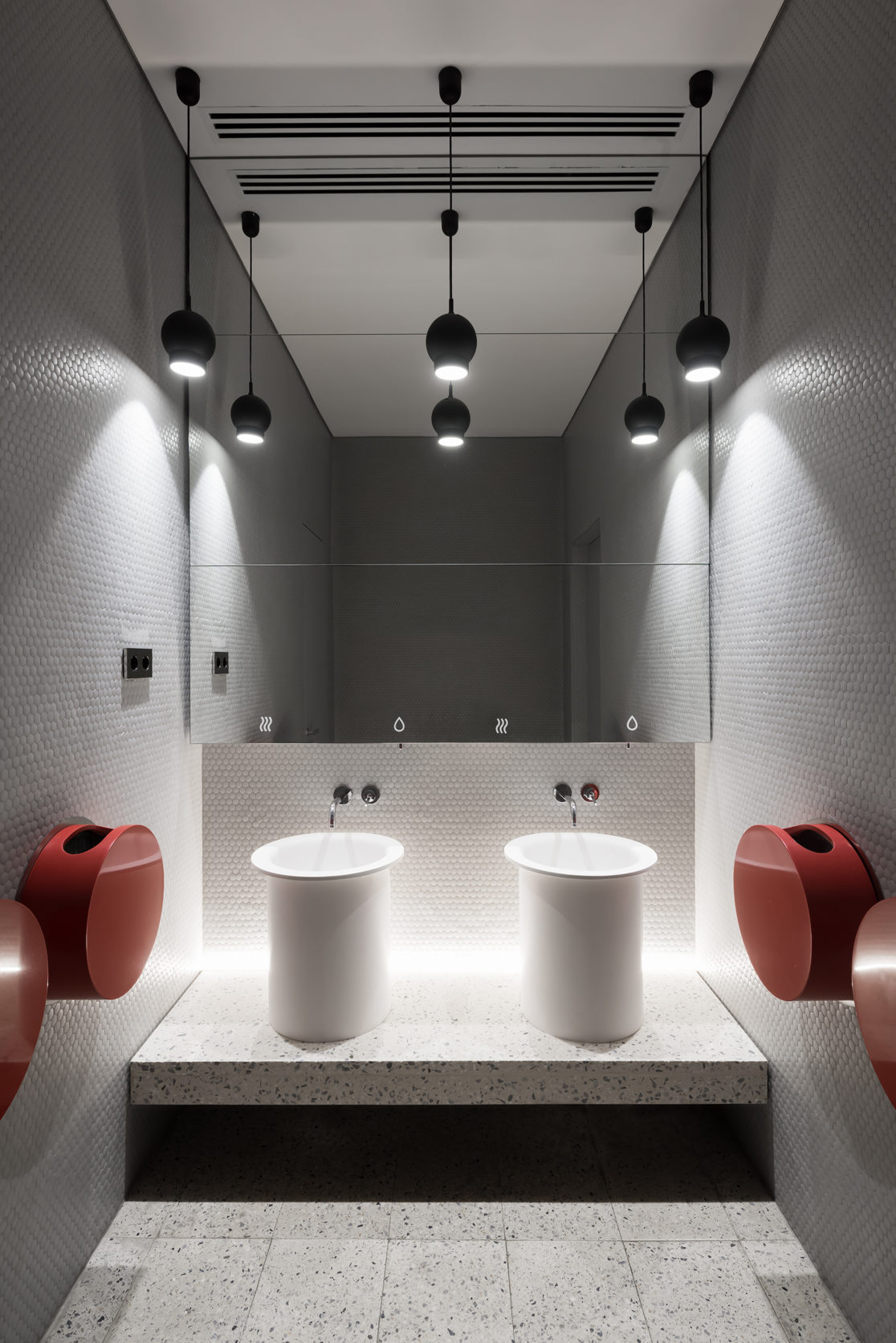 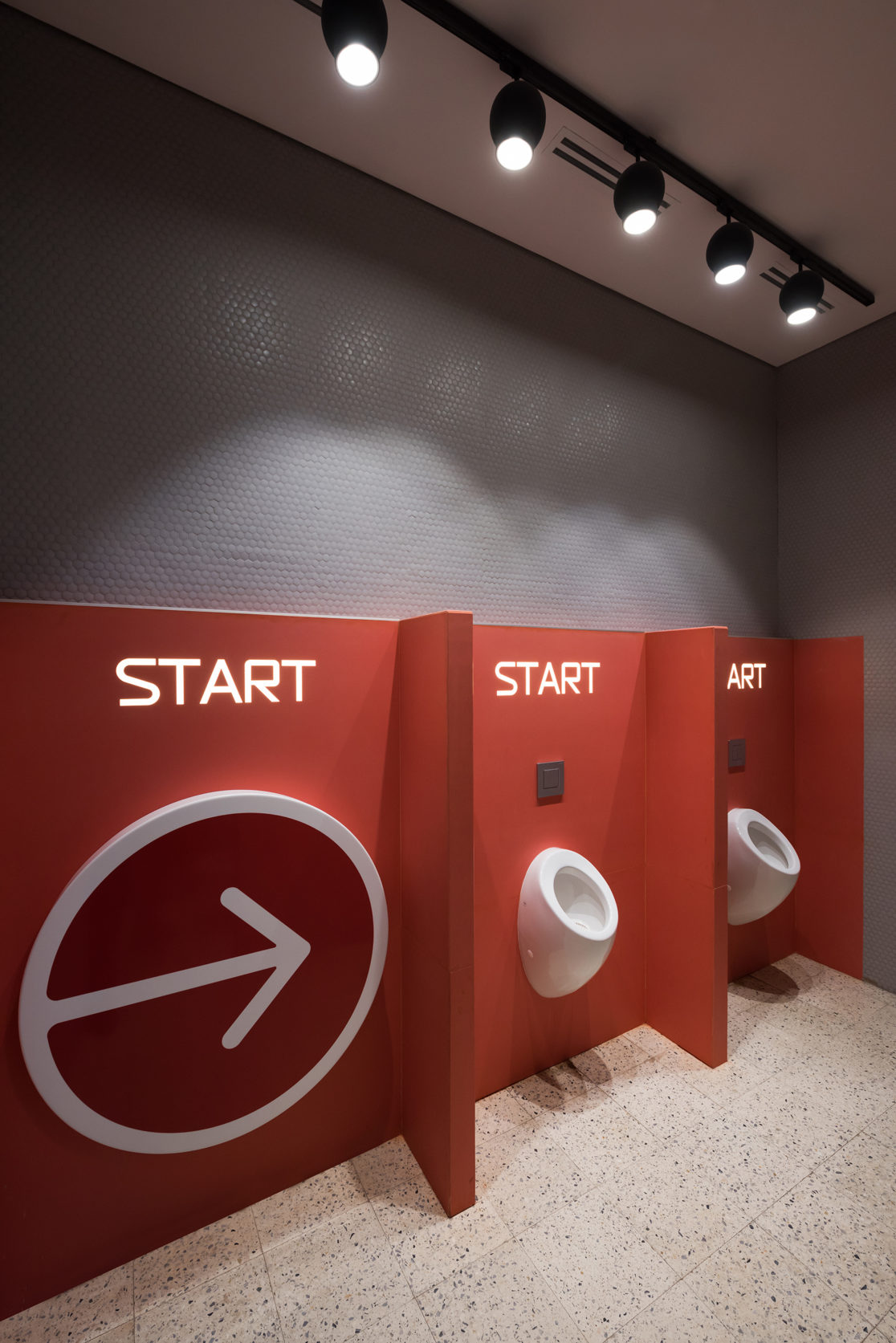 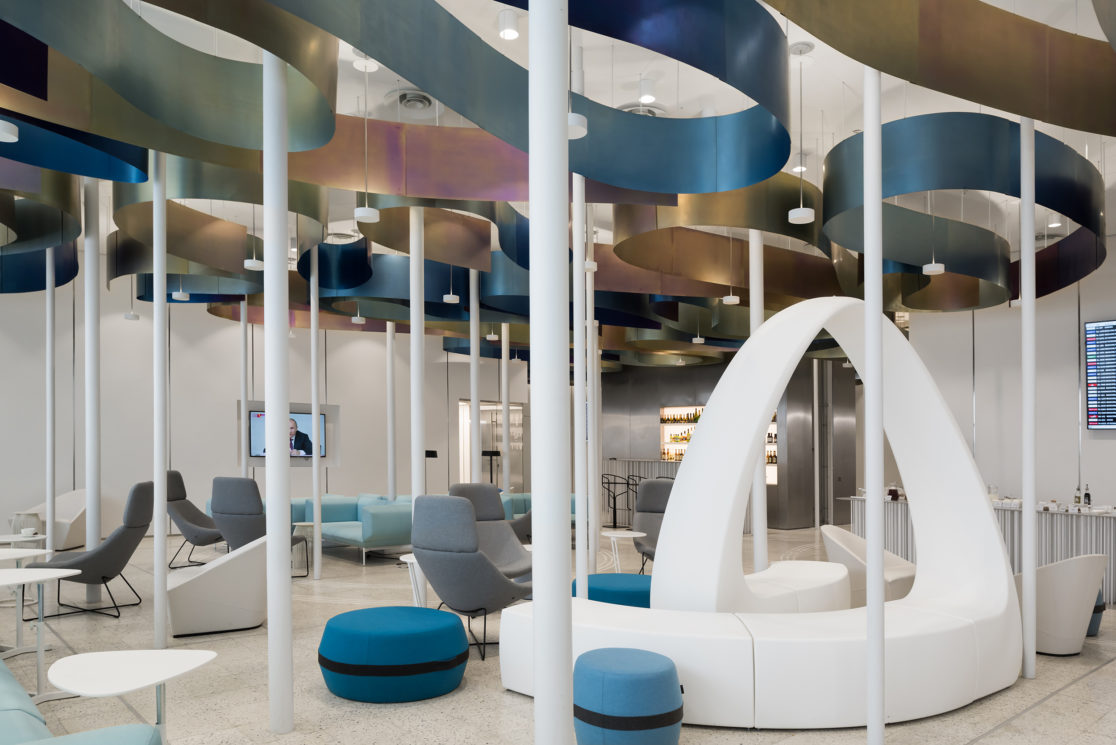